Are Americans Searching Jobs in Canada? 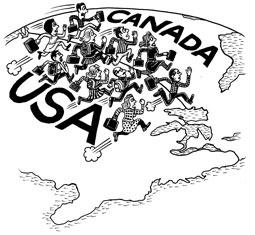 Is this election is making you want to move to Canada, You aren’t alone

Our exclusive data shows that Americans are looking for work past the northern borders. Gee, we wonder why.

As we get closer to decision day in this very, very contentious presidential campaign cycle, increasing numbers of U.S. citizens have expressed this desire to move up north if their least favorite candidate wins the election. Maybe you’ve even said it yourself.

Well, it’s time for a fact-check, American public: Are you really willing to put your money where your mouth is? We decided to dig into Monster data to see whether people are actually considering Canada.

And the polls say… yes, you are.

Monster data shows that the number of Americans job searching in Canada is up about 58% in 2016 over last year. Between January and October of this year, we saw 30,296 job searches using the keyword “Canada” on Monster’s U.S. website, which is a jump from the 19,693 in all of 2015.

Now granted, correlation is not always causation—meaning, we have no way to prove the motivation of those who performed searches—but the timing sure is suspicious.

Heading northwest, American job seekers also seem to have their sights set on the provinces of Alberta (No. 2) and British Columbia (No. 3). In Alberta, data showed that Edmonton and Calgary were popular cities for U.S. job seekers. B.C.’s seaport city of Vancouver—the backdrop for movies like Deadpool, Fantastic Four and Juno—also was a popular search. More than 1,250 Americans have searched for jobs in the “Hollywood North” this year.

The French-speaking province of Quebec (No. 4) and Canada’s Maritime province of New Brunswick (No. 5) rounded out job seekers’ top destinations.

If you’re thinking about crossing the border yourself, you want to follow those crowds since the top city for overall jobs available is Toronto, with 39,346 openings, followed by Montreal in Quebec with 25,412 openings.

About 1,200 Americans have searched for information and technology jobs in Canada, making IT the second most popular job searched. Within this sector, people in the U.S. most commonly searched for jobs as Java developers, network administrators, .Net developers and web developers.

Accountants, we did the math, and we see you looking, too. The third-most searched job in Canada, positions for accountants, clerks and bankers were common job titles among American job seekers this year.

Other popular Canada job searches by Americans were for sales and human resources positions.

If you want to join the search party, you’ll find the top five job titles by openings in  the Great White North are:

5. Customer and information representatives with 11,696 openings

So, if you feel like the country’s future is headed south come Nov. 9, at least you’ve still got options to the north. (You can find those Canadian jobs via Monster’s U.S. and Canada sites, by the way.)

Just make sure you pack a warm winter coat if you go, eh?